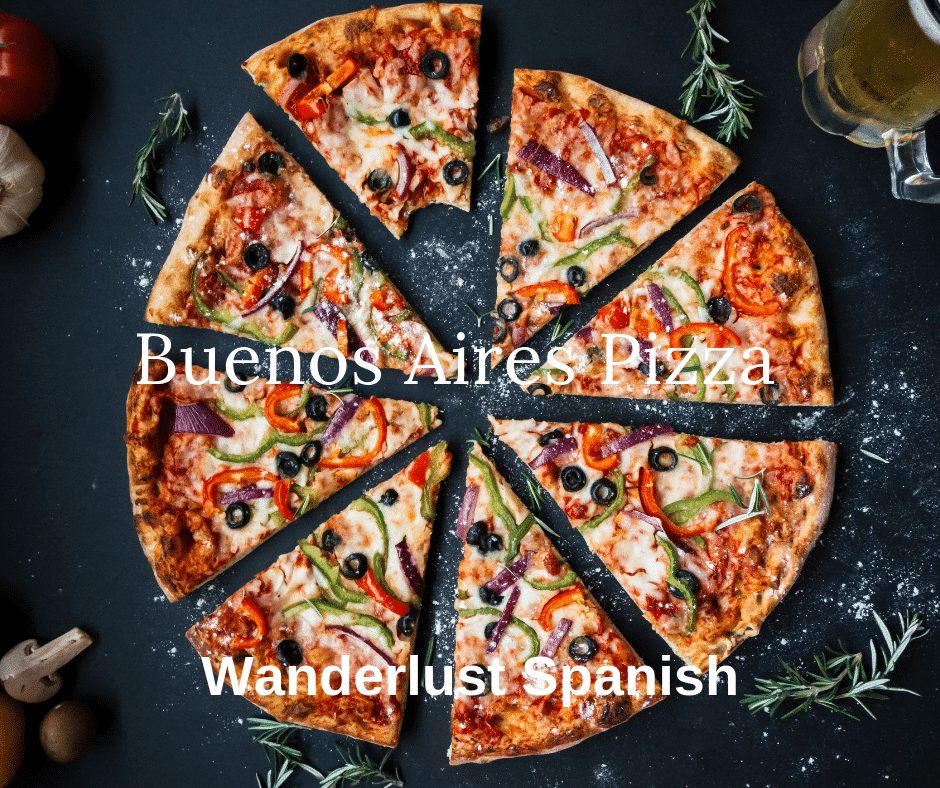 Pizzerias Buenos Aires: we are not just asado. We also eat pizza and lots of it. And by the way, I do not want to be pedantic, but … how delicious is the pizza from Buenos Aires! Everyone says so.

Let’s start with the base of the pizza. We have two varieties:

A la piedra: means that the base is thin and crispy. That’s why it’s called “the PIEDRA (the stone)”. Do not worry, that does not mean it’s like eating a stone, it’s an exaggeration to talk about the crispiness of the dough. The pizza with the stone is the favorite at the table of the Argentines.

Al molde (also called media masa -half mass-): It has a thickness of about two centimeters. That is, it has more flour, which takes away crispness but also gives more flavor to the base. Many classic pizzerias choose this form, for example, the pizzeria Santa María, in the classic corner of Chacarita (Federico Lacroze and Corrientes).

The mozzarella, the tomato sauce, the seasonings chosen, the olives, and all the additional ones that you can put on the pizza, do the rest, which is also the most important when choosing a good pizzeria.

As we are an agro-exporting country, our dairy products are of the highest quality. Now, it’s true that in some pizzerias the mozzarella drips down the sides of the pizza slice, and in others, it’s just like … smeared Well, it’s a question of investigating and choosing the one that convinces us the most.

The most classic pizza is that of mozzarella (tomato sauce + mozzarella + olives).

But the Neapolitan pizza is not far behind: tomato sauce + mozzarella + olives + garlic + tomato slices on the cheese. In some pizzerias, there is also the vegetable pizza. Do not be fooled by the word “vegetable”. It is a mixture of cheese, white sauce, cream, and chard. Other varieties: four kinds of cheese, fugazzeta (a classic: onion and cheese, without tomato sauce), calabrese (similar to pepperoni pizza – less spicy -), with anchovies (for fish lovers), and the strangest classic: pizza with pineapple Yes, pizza with pineapple.

These are the classic pizzas. Of course, today we can find new types of pizza: vegan, gluten-free, sweets, etc.

Now we go to the pizzerias. The classic pizzerias are on Corrientes Avenue. It is advisable to do a self-tour on this avenue. Stop at each pizzeria, try even a portion of mozzarella. Accompany him for a chopp or “balón” of beer, if possible. Only then you will have a good concept of each one and you will be able to contrast the different flavors and the different masses: a la piedra, al molde. The different cheeses, the different olives, the different sauces.

Let’s name some classic pizzerias. They are not the only ones, they are only the best known, the most famous.

The Guerrin pizzeria is among the oldest and most traditional street currents. It was founded around 1932 by Mr. Arturo Malvezzi and Mr. Guido Grondona, Genoese emigrants who had arrived from Italy in 1927.

As soon as they arrived in the country they were given the idea of founding a pizzeria and they rented a place chosen for this purpose located on Corrientes street between Uruguay and Talcahuano, inaugurating the Guerrin Pizzeria in 1932.

Years later, Mr. Malvezzi traveled to France to acquire said property since the owners of the property were located in that country.

In its beginnings, it was served in the traditional counter (still in force) with only a few tables. The usual for the clientele was that they ate the portions on it, fresh from the wood-fired oven.

Currently, this counter is intact to date and is the favorite of customers who visit the pizzeria on a daily basis.

The construction was extended to the living room, located on the first level, dedicated especially to the family. It was attended by great celebrities from Corrientes Street, including intellectuals, actors, and politicians. In their pleasant talks, they tasted of the exquisite pizzas always baked in firewood (more in: http://www.pizzeriaguerrin.com/quienes-somos.

Other pizzerias on Calle Corrientes

Originally located in the neighborhood of La Boca, it has a branch in Corrientes Avenue. They are the creators of the “fugazza con queso”. According to its creator, a descendant of Genoese immigrants: “It is a layer of pizza dough, quarter cheese in the middle, another layer of dough and onion on top: there is not much more secret than that, we make it square, following the tradition, but there are also those who prepare it round “

Known for having a painting by Carlos Gardel, previously it was called “Copetín de Corrientes”. It was one of the first to specialize in Pizza a la Piedra. With the smell of another era, tango, Lunfardo, an old Buenos Aires but also with the smell of the richest pizzas.

Am I forgetting something? Of course, of the eternal companion of the pizza of Buenos Aires: the fainá! This fake pizza made with chickpea flour is the ideal companion for a portion of frothy mozzarella.

So, discover the magic world of pizza in Buenos Aires. Make your own experience and share it!