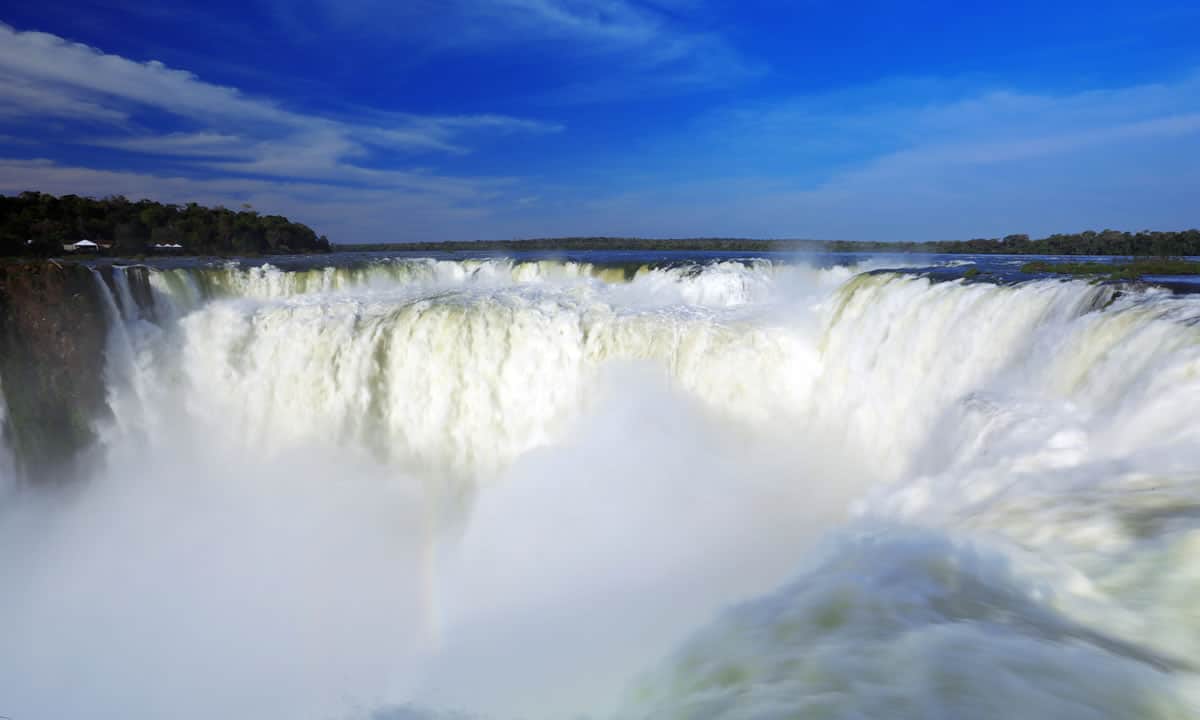 The Iguazu Falls are one of the seven wonders of the World. And they are in Argentina! Yeaaaah!

They are located in the province of Misiones (in the northeast of the country). From Buenos Aires, you can take either a plane or a bus. Of course, the plain is faster (it takes 2 hours), but you should try this 18 hours trip. The landscape’s really beautiful. You can see how the flora and fauna changes across the trip.

Misiones it’s a very small province in the northeast of Argentina. It’s known for the Falls, but also because more than 1,000 km of international borders surround the province. There’s an area, close to Iguazú, called “La triple Frontera”. Three countries in just one area: Argentina, Brazil, and Paraguay.

The weather of Misiones is extremely humid. It rains most part of the year and the heat can be quite heavy. You’ll need an air-conditioned room without a doubt. But this condition it’s also the reason for their lovely landscapes, fauna, and flora. The missionary jungle or Paraná jungle is one of the most biodiverse areas in Argentina

Something very known about Misiones is their red ground. Because of some process during the Mesozoic Era, most of the ground has this particular color.

The culture of this province shares a lot with the Paraguayan culture. Before the Spanish conquer, the guaraní people lived all along with this territory. So, many people have the same origin and ancient culture in their families. No matter if they were born in the Argentinean or the Paraguayan part of this area.

By the end of the XIX Century, Misiones received migration for Poland and Ucrania. Later, some lands were sold to German and Switzesh. The most curious phenomenon was in the center area (Oberá), where arrived people from Escandinavia, Italy, France, Russia, Poland, Switzerland and Spain. These cultures, combined with the Paraguayan and Brazilians, origin a multiethnic community.

We are sure you have seen pictures of Iguazu Falls. But be there is an incredible experience and you shouldn’t miss the chance to go. There are more than 250 waterfalls of differents highness.

The highest waterfall is called Garganta del Diablo (Devil’s Throat) and its high is 80mts.

The waterfalls are located in a big National Park divided into two areas. One is on the Argentinean side and the other one on the Brazilian side. Inside the parks, you can have a walk through all this beautiful landscape, which mixe jungle and the waterfalls or you have the option to take busses or a cute old train.

Activities in the National Park

Besides the views, you can have some fun inside the park. There’s an option to rent a boat and feeling all the power of the waterfalls above your head. Yes!, you can navigate under the falls. You can also go to La Aripuca. La Aripuca it’s a thematic park where you can learn about the effects of deforestation. And also, get to know how was the jungle in past times. On the night, you can have a full-moon walk.

In conclusion, all that mother-Earth gives us to keep breathing and living on Earth it’s in this park. After being there and keep in touch with the fauna and flora, something happens in our minds. Something about the importance of caring about the world, about how intelligent and powerful Nature is. Don’t lose the chance to go to Iguazu Falls when you are in Argentina. You won’t regret it!

PrevPreviousTú vs. Argentinian vos, with examples
NextHow to say hello in Latin AmericaNext