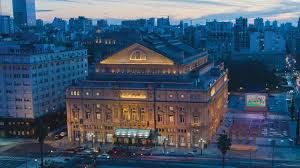 Learn Spanish in this beautiful place

The present Colón replaced an original theatre which opened in 1857. The Colón theater operated in two buildings, the first located in the Plaza de Mayo until 1888 and the second located in front of the Plaza Lavalle, which took 20 years to be built until its inauguration in 1908. This land formerly housed the Park Station, the first railway station of the Argentine Republic as head of the Western Railway of Buenos Aires

When can you go for a guided tour?

Every day including public holidays, except May 1, December 24, 25 and 31, and January 1. Tours in English and Spanish start every 15 minutes from 9.00am until 5.00pm. Times vary when the theatre is in use for productions. You can also visit https://teatrocolon.org.ar/en for more information and get the tickets.

Where? Teatro Colón, Tucumán 1171.
How many architects were involved in the construction of this magnificent building? How long did they take? Who’s graced the stage? And what happened backstage?

Get the answers to these and many more questions on these guided tours of the majestic Teatro Colón, a legendary theatre that keeps secrets of its more than 100 years of history in every corner.

In the auditorium, the main foyer, the gallery of busts, and the golden hall, visitors will marvel at the architectural details, sculptures, and interior decor.

later after the show, you will find a bunch of coffees near to Teatro colon so if you want to relax after this amazing show you can take a look at our post “Best coffe Buenos Aires“