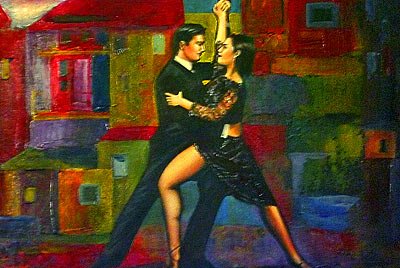 Hello, my tango fans! We know that it is an exciting dance and that you not only want to dance it, but also know its history. Where tango originated? Read this post from Wanderlust Spanish (your best Spanish school online and in Buenos Aires). Learn more about Latin America culture

Tango is one of the most influential and famous dances of the modern history. Originating from the streets of 18th century Buenos Aires in Argentina and Montevideo in Uruguay as the favorite dance of the European immigrants, former slaves, working and lower classes of people.

Initially, it was just one of the many dances. But it soon became popular throughout society, as theatres and street barrel organs spread it from the suburbs to the working-class slums. Which were packed with hundreds of thousands of European immigrants.

When the tango began to spread internationally around 1900, cultural norms were generally conservative. And so tango dancing was widely regarded as extremely sexual and inappropriate for public display

No matter what its exact origins are, the words “ tango” and “tambo”. Started being used for naming dance and musical gatherings of slaves in the region of the basin of River Plata. As this term started gaining popularity. It quickly became a synonym for the entire tango dance and tango music style.

The most famous tango´s song

The tango consists of a variety of styles that developed in different regions and eras of Argentina. As well as in other locations around the world.

The milonguero style is characterized by a very close embrace, small steps, and syncopated rhythmic footwork. It is based on the petitero or caquero style of the crowded downtown clubs of the 1950s.

In contrast, the tango that originated in the family clubs of the suburban neighborhoods (Villa Urquiza/Devoto/Avellaneda etc.) emphasizes long elegant steps, and complex figures. In this case the embrace may be allowed to open briefly, to permit execution of the complex footwork.

As every authentic artistic expression, the tango unravels our inextricable human condition, revealing the porteño spirit. Maybe it is due to this reality that it lives in the Buenos Aires neighborhood

The history of tango

No matter what the style, tango always appeals to the senses a link between the dancers. The dancers are lost in the harmonic movement and soft touch. Tango dancers from all over the world have fallen in love on the dance floor of their partners, and the dance itself, and have tangled their way into a world of passion that must be experienced to understand it.

If you want to know more about tango culture or Spanish lessons in Buenos Aires or online, contact us.

Cambalache (Enrique Santos Discépolo)
Tango immortalized in the voice of the great Ernesto Famá, this song was recorded in 1934 with the accompaniment of Francisco Lomuto’s orchestra. It was the main theme of the movie “The soul of the bandoneon”, released that same year. He also sang it with relative success, Julio María Sosa Venturini.

Volver (Carlos Gardel y Alfredo Le Pera)
One of the most international tangos of the great Gardel, recorded in the year 1935, from this verse made song the famous phrase “Twenty years is nothing”, famous saying throughout Latin America.

This was the most completed post about where tango originated.

PrevPreviousHow to say “What are you doing?” in Spanish
NextA little bit of Spanish is all I needNext