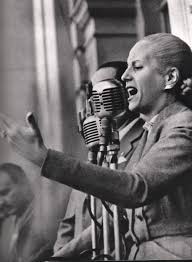 Surely you have heard stories about the grave of Eva Perón (Evita). We are not going to tell you the stories you will hear when you do the tour (ok, maybe some). We are going to tell you who Eva Perón was and why she is so important to Argentine history. And what´s happened with Eva Peron´s life

“Eva Perón was the wife of Juan Domingo Perón”. But we think this definition of someone is completely sexist. Eva Perón had her own life, besides of have being Perón’s wife.

Eva born as Eva María Duarte born in the village of Los Toldos, Argentina. A curious piece of information about Eva, is that her father was an important politician. She was part of the “illegitimate” family of this man. This was something very common at those times, but still a sample of how other person elections surely have an influence in your life.

Why? Because when Eva’s father died, her family didn’t receive any heritage from him. This fact let a mark on Eva. Actually when she became part of the Government, many years later, she changed this type of discriminatory laws. All children started to receive heritage, not only the “legitimate” ones.

Eva grew up and move to Buenos Aires city to become an actress at the age of 15 years. She was a big star in theater plays, radio theater, and movies. Once she married Perón, her activism became vital to the life of thousands of people, especially women. She put the figure of women in the speeches and acts of the Government. Before she, women couldn’t vote, and they were not even considered as part of the society. They were just the company of the men. But they were not political subjects.

In 1951 women could vote for the first time in Argentine history. At the same time, she ran foundations, dedicated to working with the poorest population of the country. These foundations were in charge of building hospitals, schools, houses, neighborhoods, and all with funds of the casino, lottery, and private donations. These foundations provoked Women’s centers of organization and later these centers became the Female (not feminist, too early for this, sadly) Partido Peronista.

Eva was one of the most important and influential politicians in Argentina’s history and also responsible for the new role of women in politics. If you want to know more about Argentine, you can see this post

Eva died of cervical cancer on July 26th of 1952 at the age of 33. In her short life she made more of most politicians did in Argentina’s history.

You also have to know, that the oligarchy of Argentina wrote on some walls in the city “LONG LIVE THE CANCER” (“Viva el cáncer” en español). All that hate was not because she was Perón’s wife. It was because she changed the life and the mind of many people. Who, after Peronism, could live a life that they never even imagine before.

One of the many stories about Eva’s corpse is that the corpse was kidnaping from the original place where Perón decided to put it when he has to run because of the military coup. (Eva Perón´s life was not easy)

The military stole the body and we won’t tell you what happens after, because its a crazy, dramatic, violent, and crazy again history.

What is the best way to learn a language, but internalize yourself in the history of culture and society that speaks it natively? We recommend doing the tour in Spanish, but first, take classes at Wanderlust to understand history, not only from a linguistic but also from a historical point of view.

If you want to know more about Eva Peron´s life, we highly recommend this site And of course, if you come to Buenos Aires, you can’t miss Museo Evita.